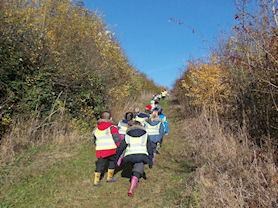 On our Autumn walk.

Pupils from Years 1 and 2 went for an Autumn walk around the village to observe seasonal changes and to recognise human and physical features.

They followed up the walk with an art activity to create a 3D model village, which will be on display after Christmas.

We also met a group of Ramblers along the route, who commented on our pupils' impeccable behaviour.

Thank you to all the volunteers who helped us on our journey... some twice! 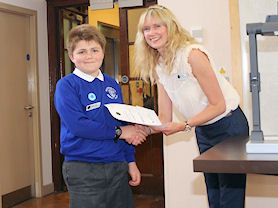 Our Primary Scientist of the Year receives his award from Wendy Cox.

One of our boys was presented with a certificate by Wendy Cox, at an awards evening hosted by the University of Birmingham this month.

He received the honour alongside other pupils from Ogden Partnership Schools, as a result of his hard work as science assistant this year.

"I was very pleased to be presented with this award, and have people outside the school recognise my interest in science," he said. He also received book tokens to help continue his scientific research at Secondary School. 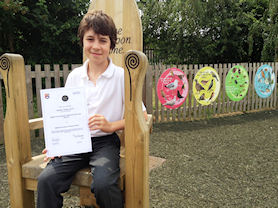 Our nominee for Primary Scientist of the Year.

The University of Birmingham School of Physics and Astronomy, hosted an awards evening on Thursday 26th June, to celebrate the talent of exceptional science students in the Birmingham, Solihull and surrounding area.

Congratulations to one of our Year 6 pupils, who was nominated for Primary Scientist of the Year.

'M' has been a diligent Science Assistant throughout the year, supporting the subject co-ordinator in the preparations for science week and organising the 'Science in the News' display on a weekly basis. He is always keen to share his enthusiasm for science with others in the school and often brings in projects from home. He wishes to follow a career in science and has already made a good start on this journey. 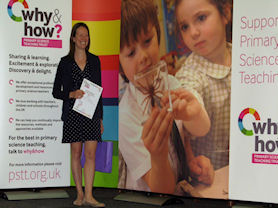 This is in recognition of her outstanding contribution to development of science teaching and learning in our school and in the wider community.

As part of the award our school has been awarded £1,000 to spend on new science resources. 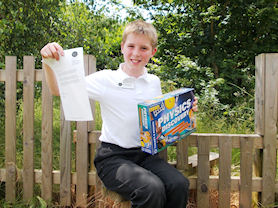 Our Primary Scientist of the Year Nominee.

The University of Birmingham School of Physics and Astronomy, hosted an awards evening on Thursday 20th June, to celebrate the talent of exceptional students studying Physics in the Birmingham, Solihull and surrounding schools.

Congratulations to our Year 6 pupil who was nominated for Primary Scientist of the Year.